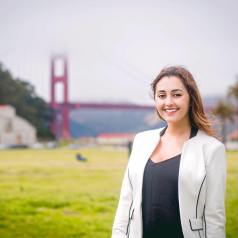 My father was born with his many brothers and sisters in Morocco and spent 13 years living in the country before immigrating with his family to San Francisco. My mother had a similar story, with Moroccan parents who also lived there for 27 years before immigrating to San Francisco where she would be born. Immigrating to the United States during the 60s and 70s was not nearly as difficult as it is now, nor was it plagued by fear and indecision. Immigration continues to be a way of escape for those who live outside the United States; a search for a greater opportunity, and a yearning for a sanctuary away from discrimination and violence. However, we know this latter part to not be entirely true.

Immigrants fleeing violence in the Middle East and Central America have a dream of coming to the United States, where pride is based on the slogan, “land of the free and home of the brave.” Except this land is not free: it was built on immigrants who poured sweat, blood, and tears into a country that would continue to treat them as outsiders and aliens. Despite the challenges they face, immigrants continue to flock here in droves searching for new beginnings for their families and themselves. For the most part, the United States has tried to create policies that assist immigrants by aiming to improve their well-being. And then came Donald Trump.

With the voluminous amount of racist, deplorable, and degrading remarks presidential hopeful Trump has made, I have been constantly questioning my presence here in the United States. Had both sides of my family not been let into the United States, I would not be here today. Morocco is an Arab country that has a Muslim majority and varying minority groups. If they had tried to immigrate today, my family would have gone through an extreme vetting process, taking anywhere between six months to three years to gain citizenship. With Trump’s numerous proposals for a ban on Muslims entering the United States, this process could become longer, if not impossible.

In December of 2015, his campaign published a press release which stated, “Donald J. Trump is calling for a total and complete shutdown of Muslims entering the United States until our country’s representatives can figure out what is going on.” In July of this year, Trump claimed we “must immediately suspend immigration from any nation that has been compromised by terrorism.” But what does “compromised by terrorism” really mean? The U.S. Department of State lists Morocco as having the “potential for terrorist violence against U.S. interests and citizens” and that there are “numerous individuals associated with international terrorist groups.” Therefore, my family’s country of origin has known ties to terrorism, and thus they would be barred from coming to the United States under Trump’s policy. However, that is assuming that the United States believed my family to be Muslim.

My family is in fact Jewish, one of the smallest minorities living in Morocco, but nevertheless, Jewish or Muslim, both groups hail from the same country. Even though Muslims and Jews come from the same “terrorist” country, would my family be granted citizenship because we are not Muslim? Does religion really have anything to do with it, or is this Trump’s way of using fear tactics to racially and religiously discriminate? It’s the latter.

It is still unclear to me how Trump and his followers could be in favor of a policy which supports these kinds of discriminatory practices. After five years of living in America, my father volunteered to fight in the Vietnam War, sacrificing himself for a country that provided him a new life. He was rewarded for his sacrifice with a debilitating illness that he has fought throughout the years and has thankfully overcome, and yet he does not regret the commitment he made to his country. When my father was admitted into the United States, he became an American. Many immigrants who risk their lives for a new beginning would gladly take on that title.

The immigrants that are walking, sailing, swimming and killing themselves to come to America are not coming to destroy it, but coming to relish in it.

What I do believe in is an America that upholds the freedom of religion as much as it defends the right to bear arms. I believe that had my family applied for citizenship under Trump’s regulations, we would have been denied. Come this November, think deeply about your friends, neighbors and families. Question what your life would have been like without them if their citizenship relied on the discriminatory policies of Trump. My family’s livelihood could have been in your hands.