“The Walk” will drive you to the edge with its emotionally charged depiction of a tightrope walker whose artistry and genius verges on madness. Philippe Petit (Joseph Gordon-Levitt) takes you by the hand as he walks you through his journey from the streets of Paris to the top of the World Trade Center in New York. Philippe’s energetic narration from atop the flame of the Statue of Liberty frames the movie and pulls you in for the adventure. 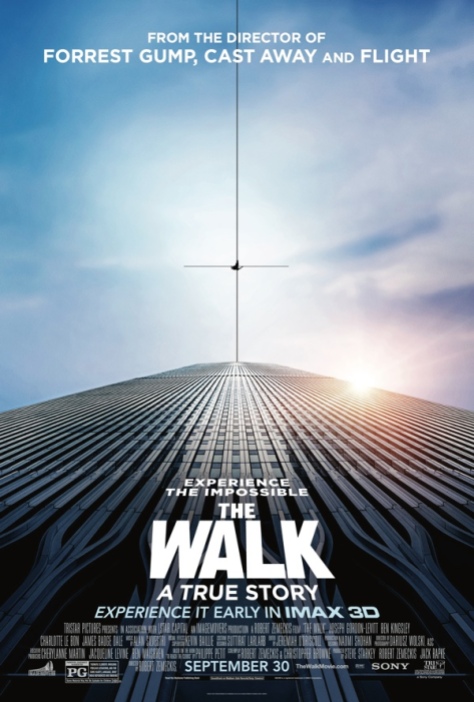 Based on a true story, “The Walk” tells the story of Philippe Petit, who had developed an obsession for the high wire after seeing tightrope walkers at the circus as a young boy. Ben Kingsley plays Papa Rudy, a Czech tightrope walking master who teaches Petit the tricks of the trade. Kingsley’s performance as Papa Rudy is truly transparent and quite heartwarming, especially as Papa Rudy grows from unwilling mentor to surrogate father figure for Petit.

After years of training, Philippe is inspired to hang his wire between the Twin Towers in New York City as it is being constructed. He enlists the help of his street performer girlfriend, Annie (Charlotte Le Bon), New York shopkeeper Jean-Pierre (James Badge Dale), photographer Jean-Louis (Clement Sibony), and acrophobic math teacher Jean Francois (Cesar Domboy). Philippe’s team is instrumental in the success of planning for “le coup”— the walk.

Levitt’s portrayal of Philippe was believable, if not a bit impassioned. He was successful in his ability to perform on the tightrope, his movements very natural for someone who hasn’t had prior experience on the high wire. Part of his success in the role is owed to the actual Philippe Petit, who taught Levitt his art and aided him in learning French. I was taken off guard by Levitt’s French accent as the movie began, but as it progressed, his accent became more natural and the dialogue seemed very authentic.

“The Walk” is a movie that can appeal to anyone. Levitt’s narration and fast-paced delivery makes for good comedy throughout the film. The earlier scenes may feel a bit slow, even routinely cliche during Philippe’s courtship of Annie. However, the plot really picks up the pace when Philippe arrives in New York, as the crew attempts to widen their circle of accomplices and plan for the stunt.

The film is a poignantly emotional experience, not just in its portrayal of Philippe’s obsession, but in the deep emotional connections Philippe fosters with the other characters. Levitt is particularly skillful in his portrayal of compassion throughout the film, especially in his interactions with Cesar Domboy’s character, whose severe fear of heights was easily triggered atop the building. Though Philippe’s obsession does much to isolate him, small, personal moments ground the film with a contrast of humanity and the mysticism of Philippe’s experience on the high wire.

It is definitely worth watching “The Walk” in 3D. Though the 3D effect may seem pointless toward the beginning, giving the film an almost unnecessary storybook feel, the 3D is really worth it in later scenes. It almost feels as if you are on top of the World Trade Center alongside Philippe. Philippe’s first step on the wire feels like a frighteningly surreal event, and the 3D succeeds in accentuating this.

“The Walk” is a transcendental journey of human achievement. With its emotion, humor, and humanity, join Petit on the wire for ‘le coup’. It’ll be worth your while.