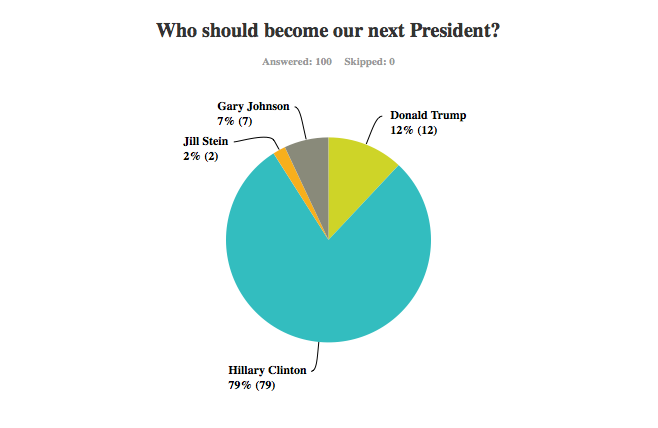 With many students already mailing in their ballots for the Nov. 8 elections, those who plan to vote at one of the many polling stations around USF have just a few more days to decide on who they’ll be voting for. This past week, in the lead up to the country’s most anticipated showdown, The Foghorn surveyed 100 students on which presidential candidates they’ll be looking to check off once they are inside the voting booths.

Hillary Clinton dominated the poll, with 79 percent of our sample size choosing the Clinton/Kaine tandem as president and vice president respectively. Donald Trump, and Libertarian party candidate Gary Johnson, have also gained support among the student population with 12 percent of the students polled leaning Trump, and 7 percent favoring Johnson. Jill Stein came in fourth in our survey with only two of the 100 votes.

The lasting effects of Bernie Sanders’ millennial revolution are still felt across campus, as many of the students surveyed are convinced that he is still the correct choice for the presidency, especially after considering the two frontrunners. Junior finance major Perris Hernandez said he will “reluctantly” vote for Clinton after having campaigned previously for Sanders. “Hillary is a very scandalous person. I feel like, in her inner circle, a lot of the people are corrupt,” said Hernandez about his skepticism of the former Secretary of State.

Performing arts and social justice major Evan Boukidis was also Team Bernie, but has since amended his endorsement for Clinton, who he considers has the edge, specifically if voters focused more on each candidate’s political track record. Boukidis, who described the race between Clinton and Trump like “choosing between the very bad opponent and just the bad opponent,” said that although it was easy to consider Clinton as a realistic presidential hopeful, Trump was never a possibility. “I have friends who are Latinx or are part of that community, or are Muslim and part of that community, and I can’t stand to see somebody who could very possibly be the next Hitler, be a part of this office that holds so much power,” said Boukidis. “And that’s why I’m voting for Clinton,” he continued.

Graduate student Cheryl Aguilar said she still doesn’t know what candidate will end up receiving her vote, admitting that she might just fill out the propositions section. Like Boukidis, however, is not amused with the idea of a Trump win. “I got my vote by mail ballot and I just looked at it and was like ‘I really can’t believe Trump made it on the ballot’,” said Aguilar.

Sophomore media studies major Tyler Wootton was also in favor of Sanders getting the nod ahead of Hillary in the primaries, but has since come to terms with Clinton representing the Democratic party. “I think I have a duty as an American living in this country to not allow Trump, who is a racist, to become President,” said Wootton, who added that the country needs a “progressive voice” in the White House to reflect the ideals of young voters in America.

Not everyone on campus is convinced with Clinton’s potential however. A sophomore psychology major, who wished to remain anonymous, made it clear that he considers Clinton a threat to national security. “There’s just so much to it. She’s a crook, four Americans died in Benghazi because of her, she had 30,000 confidential emails [leaked] and the DNC has been shown to disrupt Trump rallies with violence,” said the student voting for the Republican candidate.

Graduate student Carly Litman, who considers herself financially conservative but socially liberal, said she could see how someone could vote for Trump for his economic policies. “I wouldn’t identify with either party […] so I’d kind of rather have a Republican in [office], for financial reasons, because I see what my paycheck is, and it’s painful,” said Litman, who would go on to say that would not be enough to sway her in Trump’s direction. “I would rather have a corrupt politician right now, because that’s just what politics is [..], than someone who joked about taking women’s voting rights away.”