1.) The Triumphant Return of LCD

Not everyone was happy when they heard LCD Soundsystem was back. After all, frontman James Murphy had ended the band at the height of its popularity, and had made a big show of ending things on his terms. It seemed to some that he was reuniting the group for less than noble reasons. Did that make the roar that greeted the dance-punk outfit Friday night any less enthusiastic? Not a bit. Offering a tight set packed with their best songs, from “Someone Great” to “Losing My Edge,” LCD was out to prove that they deserved a second life. No one who rode out the beat drop of “Dance Yrself Clean” would disagree. 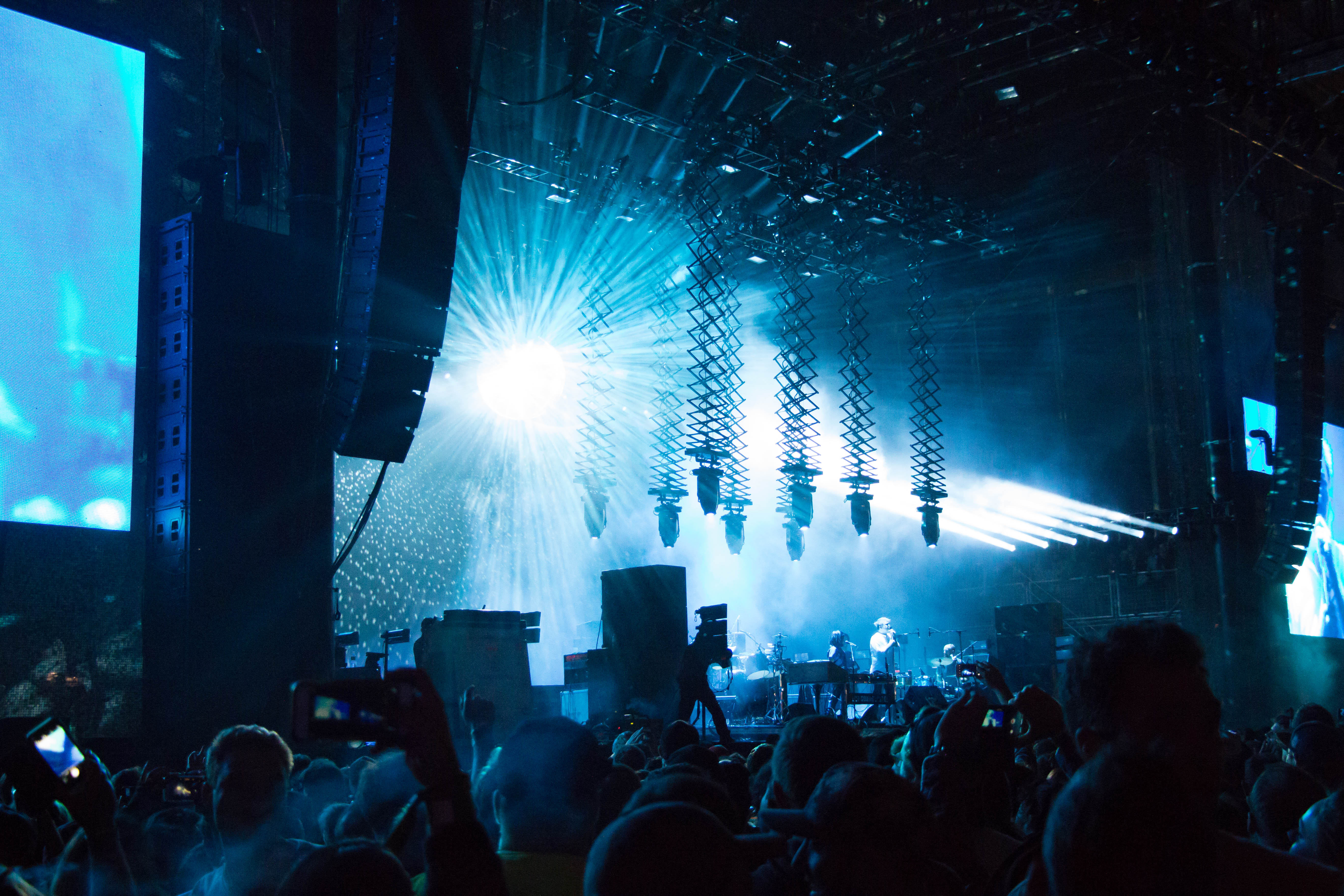 2.) The Most Interesting Doughnuts In The World

These odd, gastronomically delightful doughnuts, dusted with dried porcini mushroom salt and served with a cup of creamy Raclette cheese dipping sauce, are the closest thing Outside Lands has to an official snack. Yes, you can get them at Rich Table’s brick and mortar location year-round (and at AT&T Park), but these pillowy nuggets of joy really taste best eaten standing up, surrounded by inebriated concertgoers in the middle of the park, the fog swelling overhead. Mmmmm…cheese sauce.

Lana Del Rey’s songs are long and kinda slow, five minutes on the album and maybe twice that live, which is probably why a third of the mob surrounding the Sutro stage ditched her for Lionel Ritchie thirty minutes in. The crowd up front distilled into an adoring cluster of super fans, who enjoyed a first-class dose of pure, uncut Del Rey: swaying solemnly during slow-burner “Honeymoon,” shouting out the chorus to “Lolita,” and singing along to “Born To Die.” By the time Del Rey ended “Blue Jeans” by stepping offstage to sign autographs and take selfies, her disciples had completely lost their minds.

On Sunday afternoon, Chris Cosentino (TV chef, offal lover and chef at Cockscomb) skinned and deboned a whole albacore, while five feet away Jillionaire (⅓ of electronic group Major Lazer) blasted out a live DJ set, occasionally taking mike breaks to encourage the crowd of docile foodies to dance (they were much more taken with the fish than the beats, ahh-ing when Cosentino added lime zest to the dish). Regardless of what the crowd thought of his stage partner, Cosentino was clearly having so much fun. He threw Scotch Bonnet peppers into the crowd, daring the recipients to eat one. His young son would hand Cockscomb stickers to the maniacs who did. 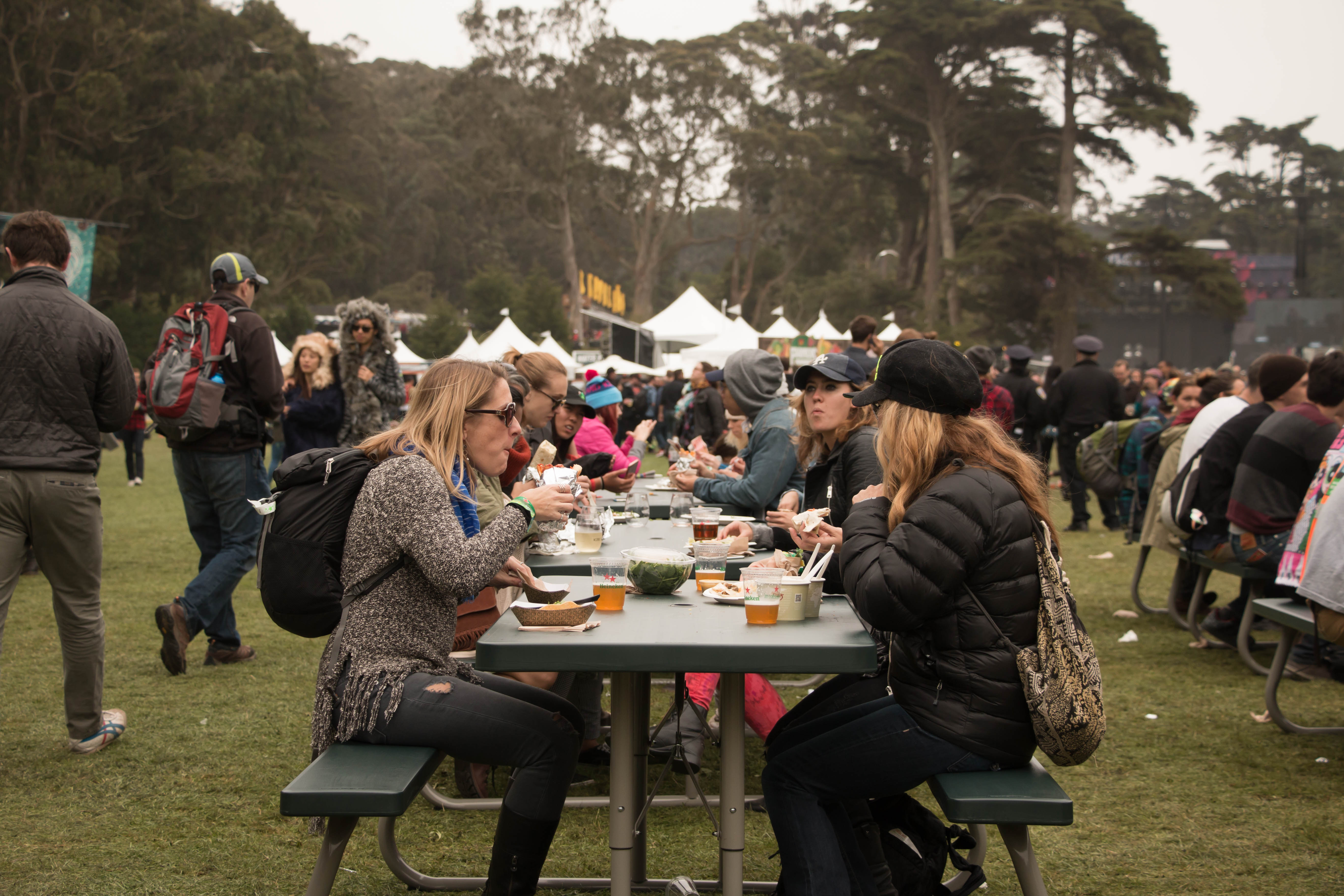 5.) A Trip To The Bizarre w/ Lennon and Claypool

The Lennon Claypool Delirium brought the weird, in the best sense of the word. Sean Lennon (son of John) grinned from behind his long hair and a blue officer’s cap while Les Claypool (of Primus) performed next to a horse mask (it was hanging on what looked like a spare mic stand, for whatever reason). The music they made was just as eccentric. Have you ever heard an epic psych-rock song with lyrics about Michael Jackson’s pet chimp, Bubbles? No you haven’t, but you totally should. Huge billows of fog began to waft over the Sutro stage halfway through the set, cranking the outlandishness up to eleven.

How good was Anderson .Paak? Worth-missing-half-of-Radiohead good. Involuntarily-dancing-with-strangers good. Mouth-dropping-open-in-happiness good. Anderson .Paak makes music that delights the listener by being undefinable: a smooth mash-up of soul, rap, pop, R&B, and rock that’s really tied together only by .Paak’s freewheeling energy. Leading mostly from behind the drumset, .Paak whipped the crowd into a frenzy with a confidence that even Thom Yorke might have been jealous of.

Sunlight finally burst out from behind the clouds just as Chance The Rapper began his Sunday afternoon set, shining just strong enough to bother those of us who thought we didn’t need sunscreen. Aside from the slightly singed cheeks, Chance’s set was fun: a laid-back hour of cuts mostly from his most recent album, “Coloring Book” that ended with a rendition of “Sunday Candy” that crashed over the crowd like an R&B tidal wave.

Not 21? Not willing to drop fifteen bucks on a mixed drink (even if it may come from one of SF’s finest watering holes)? You don’t need a wristband or a credit card to just hover and watch the roving magicians at the Cocktail Magic, an annual pop-up magic show/cocktail hour hidden away from the stages by the fog-gilded trees of McLaren Pass. If you’re lucky, you’ll enjoy the show with a stranger who, while under the influence of a few Heinekens or some Strawberry Cough, forgets that the man with the cards has no real powers. The reactions are priceless.

The Muppets tend to make every situation better just by showing up, which might be why Dr Teeth and The Electric Mayhem, the iconic house band from The Muppet Show, managed to get louder cheers than lots of other acts at the festival (I hope Vince Staples didn’t linger to check out their set). Playing five mega-popular rock songs with just one original (“Can You Picture That” from The Muppet Movie), the joke-cracking band of puppets offered no real surprises, but c’mon. It’s the Muppets. Who on earth would complain?

A golf cart comes hurling towards a milling crowd that seems to have gathered at the far end of the Polo Field for no reason. Cheers erupt and the cart is mobbed by screaming fans. Atlanta hip-hop royalty Big Boi swims through the crowd and leaps onto a stage (just a pair of speaks on some planks, really) kicking off a surprise set for the raucous crowd. The people lucky enough to hear about it (through the official OSL app) were treated to a mini-set of “Stankonia” era Outkast numbers. “I’m here to do some pop-up sh**!” the rapper exclaimed before high-tailing it back to the golf cart and zooming off into the night.