Growing up, there was only one item I would faith- fully order from my grandfather’s Greek restaurant – a lamb gyro (pronounced yee-ro in Greek) with extra feta cheese and a side of french fries. Earlier this summer I discovered the newest addition to Hayes Valley. While walking down Hayes Street one day, I spotted two little olive trees surrounding the door frame luring me in with the scent of oregano and thyme. Looking up to the sign “Souvla”, I immediately knew San Francisco has welcomed its latest Greek addition.

Souvla – Greek for “spit” or rotisserie – takes on a modern approach to the traditional Greek gyro meal. This is not your typical Greek restaurant with an extensive menu. Instead, Souvla has crafted a single sheet with four [main] proteins to choose from, including a vegetar- ian option served over a fresh bowl of kale and lettuce or pita wrap. Unlike most gyros you might find in Greece, it is Souvla’s combinations that enable its modern astray from usual gyro dressings and allow for its wonderful new take on tradition. Depending on which meal you order, each choice is a whole new experience.

For my first order, I had quickly chosen the chicken sandwich and was somewhat oblivious to the surprise contents that awaited me. Who would’ve thought I’d get a colorful Greek sandwich with pieces of navel orange, pea shoots, pickled red onion and fennel amongst the most tender pieces of chicken with Greek ranch, or “granch,” dressing. At first I was hesitant to take a bite; it looked like quite the unexpected combo of sweet and savoury. But after the first sampling, there was just no stopping. Bite after bite the juices dripped from the pita onto its patriotic blue and white tray.

The next time I went, I ordered the lamb sandwich. One method of preparing a lamb gyro is by grounding the lamb meat together with a mix of spices. Contrary to this, Souvla’s lamb sandwich was filled with the juiciest seasoned chunks of a lamb leg meat I have ever had, in a savory pita cocoon of radish, red onion, feta cheese and harissa-spiked yogurt. My taste buds were so excited at this latest discovery that they rushed me to call my mother and profess the happiness with my delectably new find.

Contrary to the sandwiches and salads, Souvla’s side dishes stick to the traditional style of Greek cooking providing the perfect balance between the familiar and modern. Take their Greek fries, for example, sprinkled with the Greek herb staple of oregano, lemon juice, olive oil and Mizithra cheese. It’s the perfect combination of salt and tartness that awakens your taste buds to devour more. And if you’re a fan of side sauces, forget the ketchup and grab a bit of “granch” dressing . Other options to choose from include the aptly named ‘Juicy Potatoes’, soaked with savory rotisserie herbs like those replicated in my mother’s cooking. I never thought I would find some- thing that could compare! A lighter side alternative is Souvla’s green salad which similarly pays tribute to its traditional Greek ingredients. 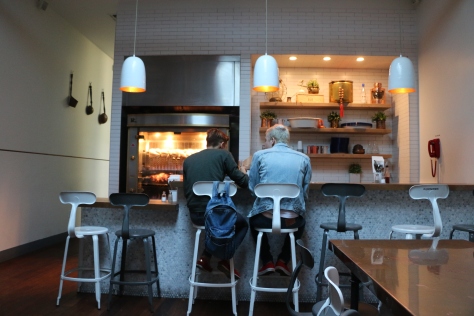 If you have hopes of ordering Baklava for dessert, you might want to rethink your destination. The only form of Baklava here is served as a topping to the yogurt with a honey syrup; or for something simple and sweet, you can try the yogurt with Cretan wildflower honey that almost solidifies atop of the cold yogurt. The honey itself holds so many flavors as the bees retain the essence of the pollinated flowers in the honey.

As you hover to locate a table in the first-come, first- serve restaurant, you cannot help but notice the many rotisseries holding the delectable golden spinning chickens . There has yet to be a time where I have walked into Souvla and not seen one of the 35-seats empty.

The minimal décor with olive branches, white walls, copper table tops, and black and white photographs of Greek life, compared differently to the bright, Greek key detailed table settings that I had been used to.

It was refreshing to think that something so traditional like a gyro could be transformed with a modern twist while still maintaining its Greek essence.