This is part of a running series of features on Dons freshman athletes. Here are 6 of the 12 freshmen joining the USF women’s soccer team. Coach Jim Millinder has said that he believes this year’s class is the best group of freshmen during his seven years with the Dons. 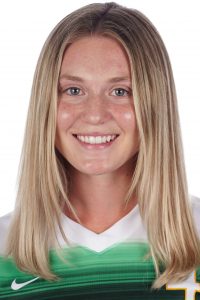 George joins Coach Millinder’s setup as a defender from Rosewood, Calif. She comes from a soccer family: three of her uncles played professionally, her cousin Machaela George plays for Santa Clara University and her sister Mackenzie plays for California Polytechnic State University. She captained her varsity soccer team at Woodcreek High School in both her junior and senior seasons. In those years, Woodcreek went 24-10-6, including reaching the 14th rank in the state and 35th in the nation. At five feet seven inches, George will be playing as a defender for the Dons but has the ability to move forward and contribute to the attack. She recorded 9 goals and 12 assists in 37 games in high school, including 8 goals in 19 games her junior year. In 2018, George was named to the All-Sierra Foothill League First Team. She has appeared in eight matches for the Dons so far, including playing 70 minutes against New Mexico State University on Sept. 2.

Teufel is a prolific forward who is looking to boost the Dons’ attack. She was a four year varsity star for the Titans of Arcadia High School in Phoenix, Ariz. She recorded a remarkable 99 goals and 34 assists in 73 games for the Titans over four years, with an average of 1.5 goals per game. She committed to the Dons during her junior year of high school. Teufel’s coach at Arcadia heralded her as a generational talent who uplifts her team on and off the field. “Of all the talented players I have seen in Arizona the last decade, Kalena, without a doubt, has the most devastating combination of speed, touch, dribbling, soccer IQ, a rocket shot with both right and left foot, and a relentless desire to help her team win,” said Coach Adam Zweibeck in an interview with The Arizona Republic in 2017. Teufel has already opened her account for the Dons with a goal against Stanford University on Aug. 24. She added her first assist two days later against Harvard University. 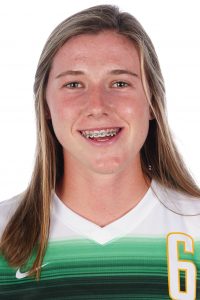 Hill slots into the Dons’ defense as she hopes to continue her national dominance. Her four year varsity career at East High School in Salt Lake City, Utah, was full of accomplishments. In her sophomore year, she made the All-State First Team in Utah’s Division 4A. She made the first team again during her junior season. Hill’s defensive prowess helped her team earn a promotion to Division 5A for the 2017 season. The jump in competition had no effect on her strong performances, as she was named to the Division 5A All-State First team. As if that wasn’t enough, Hill was named an All American by United Soccer Coaches, one of only seven high school defenders in the nation. She has started all eight of the Dons’ matches so far this season and played the entire game in all of them. Last season, the Dons defense allowed an average of 2.05 goals per game. So far this season, the Dons have allowed an average of 1.875 goals per game, thanks in part to her formidable defensive presence. 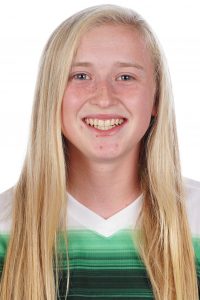 Parry joins the Dons from the girls’ soccer team at Mountain View High School in Mountain View, Calif., ranked 41st nationally in her senior year. She played 85 varsity matches in four years for the Spartans. In those games, the midfielder notched 50 assists and 38 goals. The Spartans went 77-8-6 in those four years, as Parry appeared in all but six games over that time period. In 2018, the Spartans finished second in the CIF Central Coast Section playoffs in the Open Division and lost in a penalty shootout to the Granite Bay Grizzlies in the quarterfinals of the CIF Northern California Division I tournament. In her junior year, Parry scored 12 goals and provided 13 assists in 23 games for the Spartans as they won the CIF Central Coast Open Division championship and finished ranked eighth in the nation. She has appeared in all eight of the Dons’ matches so far and has recorded one assist in 307 minutes played.

Tamayo makes the move to the Hilltop from San Jose, where she played in the San Jose Earthquakes Girls Development Academy. In her time with the Earthquakes, she played 24 games as a center back. Her team’s defense was shaky in the 2017-2018 season, conceding an average of 3.1 goals per game over 26 games. Before joining the Quakes, she played four seasons at Central Valley Crossfire Soccer Club. The defender has yet to break through to consistent minutes for the Dons, having played nine minutes against Harvard in her only appearance thus far. 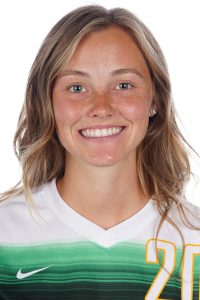 Weeks is another prolific scoring midfielder who is more than apt at finding the back of the net. In three seasons playing for Redlands East Valley High School in Redlands, Calif., Weeks scored 55 goals and 19 assists. The Dons asked her to forego her senior season of high school soccer and instead play at a higher level through club soccer. She joined the U-18/19 squad at Pateadores FC in Irvine, Calif., a club whose first team plays in the Women’s Premier Soccer League. In 26 games for the U-18/19 team, Weeks netted 9 goals. She debuted for Pateadores’ first team on June 16, and scored the winning goal in a 1-0 victory over Legends FC. She played one more game for the Pateadores first team before making the switch to training with USF. She has started all eight of the Dons’ matches this season and has already scored one goal and provided one assist.