“All women secretly love to talk about the vagina,” this marks the beginning of Eve Ensler’s “Vagina Monologues.” The monologues in the play deal with everything a woman faces, from learning to love yourself, to the horrors of rape and abuse. “Vagina Monologues” was produced just in time for Sexual Assault Awareness Month. The proceeds for the event all went to La Casa de Las Madres, a Mission-based organization that helps women and children affected by abuse. 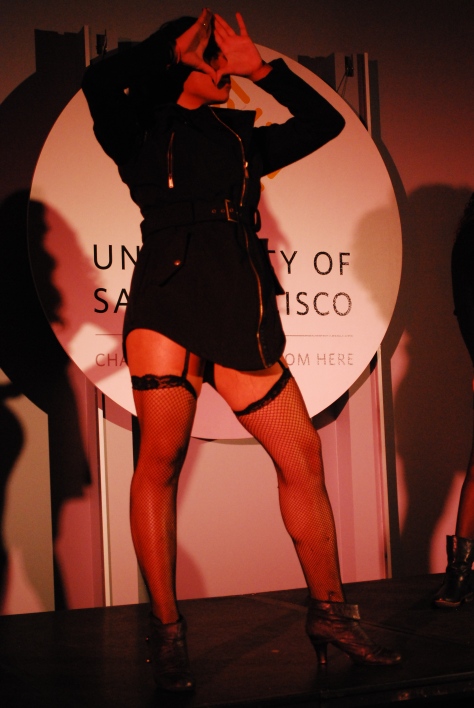 The monologues were presented as more than a play, they were a multimedia art installation. McClaren Hall was decorated by art created by the play’s cast, the seats had alternating statistics about abuse and iconic women (like Gloria Steinem and Dorothy Pittman Hughes) taped to them. This helped create a sense of community and of a movement, which is what the monologues traditionally asks of its audience.

All of the monologues were played expertly by the cast of sixteen women. The intro and lists segments, performed by Cecilia Shaw, Taylor Donatell, Chantal Bishara, and Maya Alvarez, and Bianca Pompa’s narration helped explain how “Vagina Monologues”  came about and helped relate the play to USF students by adding references to San Francisco.

One of the best monologues of the play was “The Flood,” performed by Chantal Bishara. “The Flood” tells the story of a 72 year old woman who never had sex after being traumatized by “flooding” the car of a boy she liked. The woman was slightly apprehensive about sharing her story, and her memorable answer to “what would your vagina wear?” was “it would wear a big sign saying: closed, due to flooding.” The first monologue to deal with abuse was Emma McCool’s “Crooked Braid, ” about the abuse Native American women face at the hands of their husbands. McCool showed a mixture of both sadness, anger, and resilience as she recited the monologue. Shortly thereafter came “My Vagina Was a Village” skillfully acted by Maria Kosiyanenko, which showed a woman scarred by the Bosnian genocide. In the most emotional part of the monologue the woman’s rape is paralleled to the destruction of the woman’s home. “They invaded, butchered it, and burned it down; I live somewhere else now.” Additionally, “The Little Coochie Snorcher That Could” dealt with abuse, rape, and finally acceptance. Nichole Martinez brought the perfect mix of comedic relief and personality to what could have otherwise been an incredibly depressing monologue; it with the positive proclamation that her vagina was now “a kind of heaven.”

Heavily contrasting the preceding monologues, “Six Year Old Girl” as played by Kaitlin Chassagne was the cutest moment in the play. Chassagne did a great job portraying the innocence and energy of a girl who has yet to face the struggles objectification and ridicule, which goes hand in hand with womanhood. Jazlyn Taylor’s “My Short Skirt” served as a rallying cry for women everywhere, as did Taylor Donatell’s “Reclaiming C***.” These monologues are particularly important in a college setting where women are constantly judged for their actions. When Taylor proclaims “my skirt, and everything that’s underneath it, is MINE,” you can’t help but relate to it.

Exploring female sexuality, “The Woman Who Loved to Make Vaginas Happy” was a comedic monologue played perfectly by Maya Alvarez. Alvarez embodied the strength and pride of her character, a lesbian sex worker. She also provided one of the best parts of the show by illustrating all of the different kinds of moans women can make.

“My Revolution Begins in the Body” was the perfect ending to the play. Sienna Williams brought in both her great acting ability and dance training as she pleads for a new world that accepts and supports both women and the earth. When Williams states “My revolution is love,” while being surrounded by the rest of the cast members you couldn’t help but feel satisfied.

Ultimately The Vagina Monologues, as imagined by first time director Diana Kalaji, was an excellent production, which entertained while raising awareness. The power of the play lies in the cast, who all provided great energy and emotion to their parts. The plain set only helped add importance to the monologues and the cast, and the slight changes to make the play more relatable to USF students were properly placed and funny.